I promise I’m working on some new stuff. But in the meantime…

It dawned on me recently that for a blog that has the word ‘Office’ in its title, I haven’t really shared many work stories with you. So to rectify the situation let me start by explaining what it was that I actually used to do. Which itself is best explained by a conversation I had with Junior whilst at XY.

Junior: “Mate, do you ever get the feeling that all we essentially do is tell rich people how much tax they owe at the end of the year?”

Of course, within that process we would look at ways in which these rich folk could minimise their liabilities and a whole bunch of other crap but as Junior astutely figured out, the end game was always the same.

Annnd obviously once we’d realised that that was all we would be doing, we jumped ship. He, to a completely different industry with a whole new range of problems to solve. And I?

Well… I made it off the ship. I just didn’t get very far. And before too long I was:

Essentially telling rich people how much tax they owed at the end of the year.

In my defence, Junior went to Cambridge so was better equipped to make it to shore. And although I was doing the same job, it was definitely more enjoyable at the FIRM. Though how much of this enjoyment could be attributed to a love of tax..? 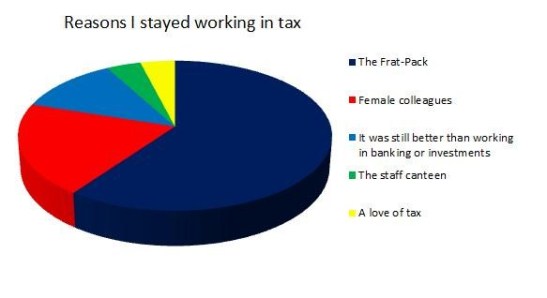 And they said sending me on that weekend Excel course was a waste of money.

Note that a love of tax DOES actually feature in the above graph. And although I’ve chosen to represent it by an equal sized wedge, the staff canteen was actually one of the greatest things about my job.

The second Thursday of each month was a particular favourite of mine as that was fried chicken day. And due to the location of our department and Slacks’ ‘connections’, the two of us could be at a table with the equivalent of a KFC bucket each by 12.02.

Our ability to gain a head start on the competition suited me perfectly on one such Thursday as I had a prospective client meeting at half twelve.

Now unlike the portfolio management guys – who were armed with performance charts and comparison figures or the bankers, who worked within specific parameters e.g. your income is X therefore we can only lend you Y – selling tax services was a bit of an arse at times.

From the bumf I’d been sent prior to our meeting, Mr Jenkins seemed like the sort of client we’d want to take on (i.e. his affairs were complicated therefore we could charge more in fees) and with staff appraisals fast approaching, he would’ve been a most useful acquisition.

Luckily I’d already my colleague had already managed to identify a few tax planning opportunities so after the brief spiel about the company’s history; I should’ve been set.

Unfortunately, Mr Jenkins was one of those inquisitive sorts and what was supposed to have been a five-minute summary was quickly turning into a full-blown history lesson.

Normally this wouldn’t have bothered me too much. But it seemed that I had been a little too aggressive with the chicken drumsticks at lunch, as after around 10 minutes into the meeting I felt the sudden urge to ‘drop it like it’s hot’.

Immediately, I thought of Flembo’s advice when he was in a similar situation. However I didn’t feel comfortable performing an impromptu coughing fit. Not least because one cough out-of-place and we could’ve been looking at a full-blown shit-uation.

I did my best to keep my composure and soldier on but there was no way I was going to be able last until 1.30. And if I didn’t act soon, things were quickly going to escalate out of hand.

As I sat there, palms sweaty, brow glistening, my stomach making those awkward whale noises (that you’re not quite sure if anyone else but you can actually hear), I heard Mr Jenkins ask a question about the FIRM’s financial position.

This was it. This. Was. The lifeline.

Me: “Well, I don’t have any figures to hand unfortunately.” This was a lie as financial snapshots were readily available in most meeting rooms.

“But if you bear with me a moment, I can grab you a copy of our balance sheet.”

Mr Jenkins: “Oh it’s not that important. Just being curious.”

Me: You’re right. It’s not important. Nothing you’ve fucking asked me has been important you cock. “Nooo, honestly it’s fine. It’ll take no time at all. I insist.”

And before he even had time to respond, my hand was already turning the doorknob to let myself out.

With one hand firmly clamped around my arse cheeks, I sped off down the corridor to the gents; picking up a copy of the balance sheet from one of the unoccupied meeting rooms en route.

I won’t go into the specifics of what went down but the experience was very much how I imagine it must feel to birth a manatee calf. 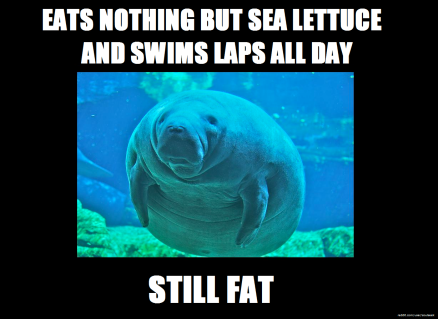 And once it was over I had to stay seated for a few seconds to catch my breath and dare I say it, savour the moment.

As I rounded the corner and made my way toward the sinks, I noticed someone with his back to me, washing his hands. Oh dear god, no. It can’t be?

It was Mr Jenkins. And it was too late. He’d already noticed my reflection in the mirror and had turned to face me. How long had he been there? Had he heard me committing murder in stall three? So many questions, so little time.

“Well I wouldn’t have thought you’d find a balance sheet in there?” he quipped.

And I responded, almost laughingly though I’m still not sure why, “no you’re wrong, I have one right here.”

And with my clammy, unwashed hand I removed the now slightly crumpled, slightly damp piece of paper from under my arm and offered it to him.

It truly was as awful as it sounds and time did in fact stand still for at least 5 seconds whilst he contemplated what to do.

He mumbled something under his breath, reached out his hand and making the absolute bare minimum of contact with his thumb and forefinger, he took the balance sheet from me, turned his back and swiftly exited the gents.

He asked no more questions about the FIRM once the meeting resumed and although it was completely futile, I still talked him through the planning opportunities that were available to him.

Though my hands were now clean, I held no ill feeling towards him when he opted for a modest head nod instead of the customary handshake to mark the end of our time together.

As I closed the door behind me, I looked back into the room to see if he had left anything behind and there; standing alone in the waste paper basket, seemingly untouched after it had left my possession was the balance sheet.

I guess it really wasn’t that important after all.

77 comments on “The Balance Sheet”