If they are willing to service you for less, they must be desperate; which means they are amenable to sleeping with all sorts and have possibly contracted all sorts at some stage. Placing your Johnson in unnecessary danger.

After hearing that Nottingham University had the highest ratio of girls to boys in the country, T-Money, myself and a few others decided to pay our friend Tom – who was studying there at the time – a visit.

Now although the ratio suggested that the odds were stacked in our favour, there was no adjustment for lack of game.

So after a third successive night of no action, I found myself wondering along Forest Road (a shady area fabled for its street hookers) with Tom’s friend, Ed.

Having walked up and down the road to no avail, we were just about to leave when a cab pulled up a few feet in front of us and out stepped a lady dressed in a cheap looking white suit. She walked in front of us for a few minutes without making eye contact.

Me: “Shut up Ed. She can bloody hear you” I snapped back, worried that we may offend her.

Ed: “Well I think she is and I’m gonna find out.” At which point Ed walked ahead to catch up with her… “Excuse me, do you have the time?”

Lady in cheap white suit/potential brass: “Yeah, it’s just gone one”…  Long, excruciating pause… “Are you boys looking for some action by any chance?”

Nice Ed. Way to build up the girl’s self-esteem.

Confirmed brass: “So I take it that’s a yes then?” After commencing the bidding at £10 for head, they eventually settled on £30.

Now even if you’ve never done this sort of stuff before, you’ve got to know that that just doesn’t sound right. I suggested to Ed that we just go home (by that stage, I’d decided jerking off was a better option) but he was having none of it. 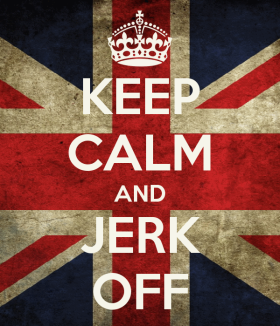 It was whilst fumbling around trying to find his keys that Ed noticed both his hands were stained in blood.

Ed: “Urrgh! What the fuck is this?” he screamed at me, waving his palms in front of my face.

Me: “I don’t fucking know dude but I’d appreciate it if you didn’t fling those things in my direction” I wailed back, edging closer to my door and seriously contemplating jumping out of the moving cab just to ensure he didn’t touch me. 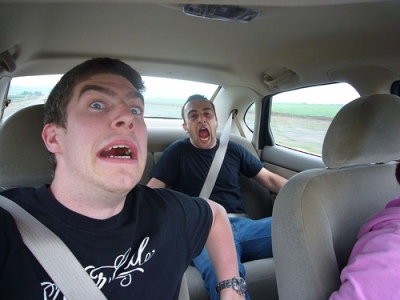 After a few seconds of staring at one another in disbelief, he finally composed himself and drew his hands in to take a closer look.

Me: “Maybe she was on her period?” I said, still hugging the back door. “You did wear a condom right?”

Me: “Ok let’s just calm down then. Tom must keep some bleach or something downstairs. When we get in, douse your hands, and probably your cock, in that stuff before having a shower. There’s probably a clinic near the uni where you can get yourself checked out in the morning.” And we both got out of the cab and didn’t speak about the incident again.

I saw Ed randomly a couple of years later on the tube and am very pleased to report that he didn’t catch anything that night. But the moral of the story; if a girl is only going to charge you something in the low double figures.

Please. Get the fuck out of there!

82 comments on “Negotiating with Hookers – The Second Golden Rule”

This entry was posted on 13th February 14 by Sean Smithson in Boys will be Boys and tagged desperation, hookers, humor, humour, period, prostitution, sex.